“Don’t either of you guys have a map?”  You may remember this as the beginning of my education in backpacking with experienced outdoorsmen and free spirits Rob Graham and Ed Mahoney during a trip to Colorado’s Front Range last year (see my post “On The Road Day 2” at https://wordpress.com/post/32316380/1028/).  So I was touched to see that Rob had brought along the Ley CDT maps when I met up with him again this year to hike a section of the Continental Divide Trail that passes through New Mexico near Silver City. 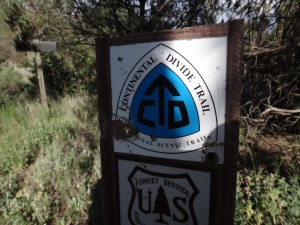 I’d brought along my own map.  The National Forest Service’s 1:126720 scale map of the entire Gila National Forest, which opens out to about 4 feet square, and covers the entire forest’s 3.3 million acres.  Rob had suggested we do the trail as a series of leap-frogging day hikes, leaving a car at each day’s trailhead and the other car at the next day’s, avoiding having to carry our tents, sleeping bags, and food.  I’d guessed this was Rob’s plan the moment he brought the trip up months ago, because he’s pretty hardcore and I’d just slow him down, but he’d need two cars for this trip and I guess Ed was too smart to volunteer.  Plus, Rob’s wife probably made him bring along a grown-up.

It all looks simple on a map.  Just follow the dotted line, and you’ll get from one place to another, so that’s what we planned.  I camped the first night at the Bear Mountain Trailhead, with Rob showing up late at night out in the middle of nowhere like a campfire story axe murderer, hollering “Schools, you out there?”.  We took his car the next morning to the other end, the Little Walnut Rd Trailhead, and started the simple plan of walking back to my car.

That sign says it’s a six mile hike to that trailhead, but I’d already understood that all measurements in the outdoors are suspicious.  I’d thought about that before Rob arrived, and decided to carry my pack anyway with more water and food than I thought I’d need, enjoy the walk, and see where I ended up.  With Rob, you just can’t know.

Well, we did a fair amount of walking.  One thing that’s always stuck with me from my time as a boat captain is that an average person walking fast travels at about 3 knots (the maximum speed in port), or 3 mph for you landlubbers.  So that six mile walk should have taken a couple of hours, four at the most if you take into account stops and hills and general lollygagging.  Rob and I were already well past that point when we followed the trail to a point where it crossed a dirt road . . . and simply disappeared.

Asking around in town later, we’d learn that there was an “old” CDT, and a “new” CDT, and that “you boys musta been on the old trail.”  I think that means that my car parked at the end point was at the beginning of the old trail, while we had started off at the other end, which was both the old and new trailhead, but that somewhere along the way the two diverged.  All I know for sure is that we walked miles in various directions trying to pick up the trail again.  We had returned to the road to get our bearings, and were just discussing taking off in the wrong direction again, when we flagged down a passing truck and asked them how to get to Bear Mountain Road.  “Well, you’re on Bear Mountain Road,” to which his eyes added but mouth did not utter “dipshits.”

And here is the best part of the whole trip for me, when he asked to see a map and Rob handed him his Ley CDT map, the one that shows the trail and environs, the one that it quickly became obvious did not encompass our present location.  This is where my NFS representation of the entire 3.3 million acre forest came in handy, as the driver opened up its expanse and eventually found us way, way, way down the road from where we wanted to be.  My compassion for Rob did not permit me to look at him and smugly grin, but at that moment I loved my map like my child.

Despite some new blisters

and black toenails, we made a pretty good couple of days of hiking the Gila.  A minor diversion on a side trail off the Arrastra trailhead that took us unexpectedly into the grounds of a sect of woodworkers, a side trip to visit the Gila Cliff Dwellings and nearby hot springs to soften up some sore muscles, but overall an honest few days of effort.  Coming back south into town on our last full day, Rob suggested we find a Mexican restaurant he’d been recommended, and then find some alcohol.  We didn’t realize it was Sunday until we found the restaurant closed, and so had to settle for food and alcohol in the same spot, the Little Toad Creek Brewhouse (www.littletoadcreekbrewerydistillery.com), a hipster-ish brewhouse (is there another kind?) we’d visited before.

A few pained expressions and back-of-the-room seating is expected when we show up in restaurants after, in my case, a week of not shaving or bathing, but it immediately became clear something weird was going on in this place. We were greeted upon entering, seated amongst other diners, and then quite exaggeratedly ignored.  Other tables within arms reach were served, but no one bothered to even look at us, and suddenly I felt a total peace come over me–in a restaurant, because of bad service.  I had one of those little epiphanies that remind us that we are still truly alive.  Here I was, with no place else I needed to be at a certain time, nothing else on my mind, really no problems at all.  I wasn’t even especially hungry.  My walks and Rob had allowed me to let go of everything, except that moment.  All I wanted to do was sit there and watch how this was going to all play out.

This was not the case for Rob.  I understood gradually that a good locally brewed beer at the end of the day was the soul of Rob’s outdoor experience, just like a good cup of coffee at a pre-dawn campsite is for me.  Normally the most serene person I have ever known, someone I have never seen angry, after 15 minutes or so of waiting Rob’s face tightened up and his eyes narrowed to little reptilian slits.  “Can we get some service?,” which seems like a normal request when you look at it written out like that, but when you see it coming out of the mouth on that face you realize some kind of boundary has been crossed.

We got our beer, and we got our food, and Rob relaxed.  We still had plenty of daylight as we left the brewhouse, and so I wasn’t surprised when Rob suggested we try that first section of trail again, but this time from the other end, just to see where the “old” trail joined the “new” trail, allowing us to leave not feeling we had missed something.  I was game, having no other plans, no place else to be other than right there, for however much time was required.  I couldn’t know then how the hike would turn out, couldn’t know we’d walk quite a distance and never find anything we recognized, well past the last faded CDT trail marker.   I just grabbed my pack, threw in enough water for two, plus a little more if things didn’t go as planned.

This is a picture I took on the morning I came down from the Guadalupe Mountains.  In my hand is Broken Arrow, my last water.  You may know the term “broken arrow” from the Mel Gibson movie “We Were Soldiers.”  Mel and his troops are about to be overrun by the North Vietnamese army, and things are not looking good.  They’ve done their best, all they could, but their training and equipment and bravery have not been enough to get them out of this jam.  So Mel calls out “Broken Arrow!” over his radio, announcing to the world that he can no longer save himself, and American air power swoops in and blows the hell out of the North Vietnamese army.

My Broken Arrow was a bottle of water.  Last time I went to GNMP I let the National Park Service scare me into taking about 500 gallons of water along in my backpack, and things did not go as planned.  This time, fortified with substantial experience and a growing sense of the futility of life if you couldn’t just damn well walk wherever you want when you felt like it, I relied on my own instincts and stripped my supplies down to a minimum.  Very little food (I’m not hungry hiking, anyway), and only enough water to make two cups of coffee every morning–because life is not worth living without two cups of coffee every morning.  Plus my two liter water bladder in the pack.  I was confident that this would be enough, but just in case I created Broken Arrow, my last water if things went really poorly.  I decided that if I had to open Broken Arrow, I had failed and needed to get back down to my car and showers and comfortable beds and just go home and watch TV.

Didn’t need Broken Arrow.  I thought about drinking it on my way down at the end, luxuriating in extra water, but I wasn’t thirsty.  Broken Arrow was the child of an adult life spent always knowing how to get out of a rough spot when things don’t go as planned.  Because things never go as planned.

There’s a lot to be said for planning, for covering the unexpected eventualities, for getting out of a mess.  I have certainly gotten into more than my share of messes in the natural world over the years, and covering those eventualities literally saved me.  It is something to know “I would be dead now if I hadn’t . . . .”  But, you can’t know everything, see it all beforehand, prepare for the truly unexpected.  I’m not sure if you’d really want to .

I saw this thing growing by the trail somewhere up on top.  That stalk growing out of the agave is about nine feet tall.  I have no idea what kind of agave it is, or what’s going to come out of that thing when it finally blooms.  But I think it’s going to be wonderful. 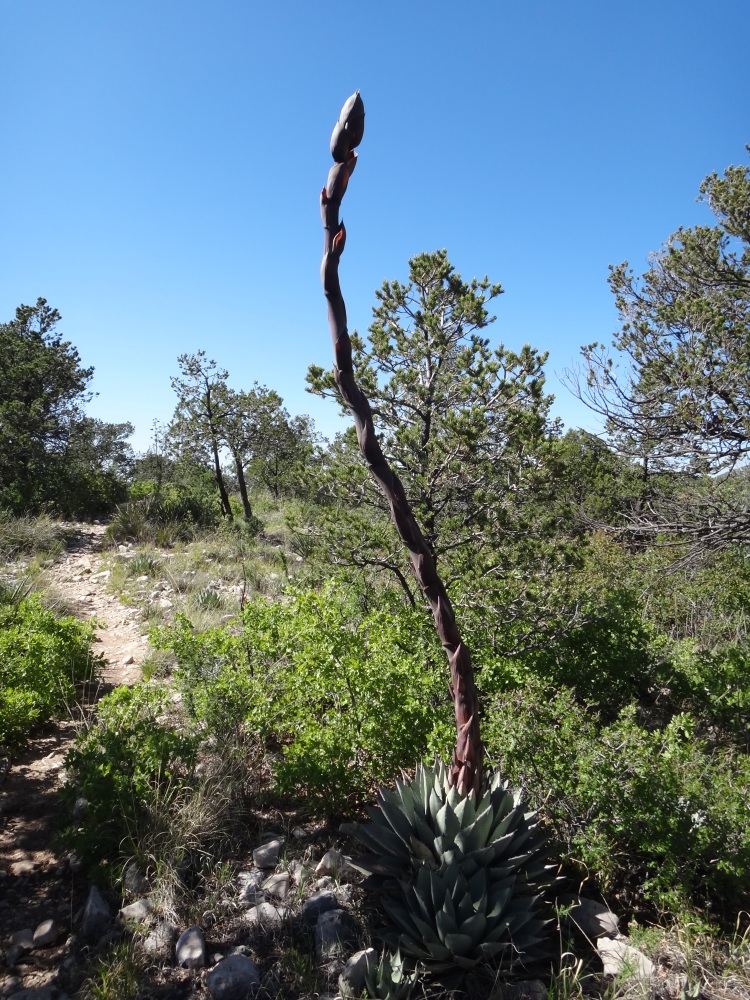