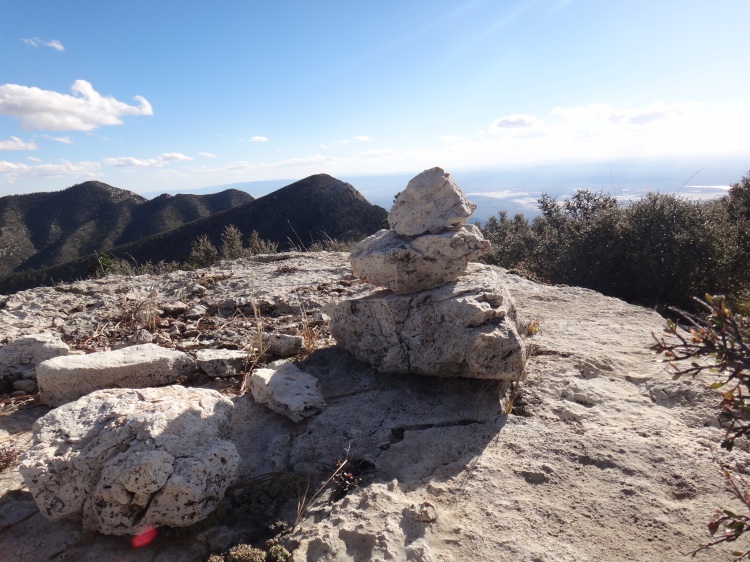 You can be almost lost.

I wanted to thank whoever built this little cairn up in the Mescalero area of Guadalupe Mountains National Park.  It’s not one of the ranger-built ones you find along more heavily traveled parts of the park–too simple, just there, and not part of a series.  But somebody had been on exactly the same windswept, featureless mountaintop I was standing on, not quite lost, but not seeing the trail any more, either.

I haul out to GNMP whenever I really need a time-out and want to get up high.  In Texas, you don’t have many choices, but GNMP is pretty awesome.  Three days up, and the only person I saw was a ranger on his way down near the trailhead.  Before I left, a guy at work asked “but what if something goes wrong?,” which pretty much summed up the whole point of the exercise.

I was thinking of starting a “Brotherhood of Cairn Builders” (if anyone can suggest a more gender-neutral term, I’m all in.  I thought about “Guild,” but that implies an apprenticeship and exams and dues–let’s not forget we’re talking about a well-executed pile of rocks).  All that’s needed to join is an ability to recognize when you are almost lost, but found your way, and to understand that someone else may someday be in precisely your situation, and that you can offer a little bit of help.

Sometimes you need a cairn.  Almost lost, but not quite.