I found the toilet when the light was perfect. This is an unusual statement to make, I think. The early morning sun had just risen above the surrounding mountains, and its rays of light unfiltered in the pure mountain air had pierced the one opening in the forest canopy and illuminated the Skagit Queen toilet precisely. Stonehenge and the solstices were not more perfectly aligned. (For more on the non-plumbing aspects of the trip and the Skagit Queen mine, visit https://georgeschools.wordpress.com/2022/08/12/north-cascades-2022/).

I have a small collection of wilderness toilet photos. Backpacking alone in the mountains frees your mind up to think about a lot of things you are normally too preoccupied to consider. Sometimes, because I encounter extraordinary ones, I think about toilets.

When I’m not needing to actually use a toilet, I tend to just walk. “Get in the zone,” as the through-hikers say, so that you can cover some distance. It takes a couple of days to get used to walking that much, to carrying that backpack up and down and back up mountainsides, so for a while what you think about is how much work it all is. I like exercise, and this trip was pretty much like Groundhog Day for workouts, except in this version you woke up every morning and said “Leg Day!” I pictured my quadriceps doing the work, getting stronger, and then I was ok.

I found another nice toilet in North Cascades. The toilet itself was nothing special:

Nothing to visit twice, right? It’s like sitting inside a forgotten flowerpot overgrown with weeds. But look at the view:

How many times in life do you get out your camera while sitting on the toilet? Ok, well, don’t answer that. I probably don’t want to know. But you get the point.

Best In Show I’ve shown you before, but it is worth seeing again. I do not know what the toilets are like inside the Sistine Chapel, but this one in Glacier National Park’s Boulder Pass is one to see before you die.

Get outside and see some extraordinary stuff.

“The route over Knapsack Col, really is just picking your own way. It is a bit southeast facing, but I think it is going to hold snow. You might be able to come to the head of Knapsack from Peak Lake, but not sure you are going to want to descend down. You’ll have to see how it looks when you get there.” –Meredith M., National Forest Service, Pinedale Ranger District

The route over Knapsack Col into Titcomb Basin is not on the map, because it is an aspiration, not a route. To get here, I had already hiked over Lester Pass and Shannon Pass, which weren’t particularly difficult but now gave me pause to reflect on the difference between a “pass” and a “col.” Both indicate low points between peaks, but standing in the clouds as a rain began to whip around me, looking at the snow-white sheet of mountainside in front of me, I understood that you can pass over one, but probably not the other.

Most people get into Titcomb Basin by a direct route out of the Elkhart Park trailhead near Pinedale, WY, a two-day, fifteen-mile hike, but I’d taken the long way around: down Pole Creek to the Cook Lakes, up the Highline Trail and over Fremont Crossing, and off the top of my map to Peak Lake at the urging of Charles Kemp, an amazing human being (http://ckjournal.com). Charles had taken this route almost a decade ago, had inspired me to start backpacking when my time was finally right, has inspired me to many, many things. Everyone should have a Charles Kemp in their lives.

I had crossed a couple from Kalispel on the trail, among the surprisingly few people I saw in eight days. They said they had just come from attempting to go over Knapsack, had made it to the top, but had turned around due to extensive snow on the other side. “It’s a 1,700 foot drop, and a 70 degree slope, and there’s an enormous cornice of snow running the width of the other side. But you look sporty; if you’re comfortable down-climbing and have an ice ax, you can probably make it.” That “probably”: you either do or you do not make it. I thought about that for a long time. And about Charles’s ice axe, which I did not have.

And now, facing the way up that Meredith from the Forest Service had expressed doubts about, well past the end of any trail, I realized that even if I did make it up this “easy” side of Knapsack, I would never make it down the “hard” other side. It was like standing before what I’d always imagined the Greenland ice pack must look like. Before turning around and heading back down to Peak Lake, I noted that there were unquestionably no tracks whatsoever left by anyone else who may have gone up Knapsack, including the couple from Kalispel. I really stood there a long time, scanning the snow, looking for proof that what I hesitated to do was possible, looking for someone else’s confirmation that I should continue on. But lacking that, I took a moment to take it in–the black rock faces, the unmarked snow field and mountainsides, the clouds and rain I was standing within, the glacier and waterfall to the south, close enough to touch. For a moment, I had everything I needed. Except an ice ax.

I hesitated to send you this, but you’ve written about your experiences in Vietnam, and talked specifically about Dwight Laws (KIA 10/30/66), Lurch Donohue (KIA 03/01/67), and Jerry Georges (KIA 03/23/67) in your blog (http://ckjournal.com/category/travel/asia/vietnam).  I’ve read these posts uncounted times, and I probably will continue to until I die.  Everybody should.  Still, they are your memories, and that is your life, and I didn’t want to overstep the bounds.

I just returned from a family vacation to Washington, DC.  You know my family, and you know me pretty well, I think, so you know that means that when we’d seen all the sights their patience could contain, I went off on my own.  I didn’t know if you’d ever been to DC and the Vietnam Memorial, or if that was something that even interested you.  In fact, I wondered if perhaps that was something you had decided you did not want to do.  So here’s the part where I tell you to just delete all this right now, and tell me to erase it all from my hard drive if you want.  I’m totally ok with that.  They are your memories, and that is your life.

So from this point on, here’s what happened:  I knew I wanted to visit the Wall.  I knew I wanted to find the names of Dwight Laws, Lurch Donohue, and Jerry Georges and send them to you.  And I knew I needed to be there alone, even though I never knew them, the war was over two years before I graduated high school, and they were just names to me.  Three names among 58,307 names of dead Americans.  But I was thinking I could find the names of these people who are very real to you, and you are very real and alive to me, and that would help me understand what I was looking at.

Like my own Greek chorus, as I’m scanning panel 11E130 for Dwight’s name, a family passes by and a kid says “it’s just a bunch of names!”  There’s a Vietnam vet volunteer there explaining the war and the wall and the names to people, and he says loudly enough for me to hear a couple of times “just ask if you need any help,” but I didn’t want any help.  Eventually I figured out how to find Dwight’s name, and here it is:

After that, it was pretty easy to find Lurch’s name (which was actually Francis, so now we know why your friend went by “Lurch”),

As I’m looking at all these names, and trying very hard to think about Dwight, and Lurch, and Jerry, I still wasn’t making the connection I’d hoped.  It was still just a bunch of names:  fifty-eight thousand, three hundred and seven names of dead Americans.  And then it occurred to me that your name was not on that wall.  There was no Charles Kemp.  It could have been, probably should have been, but it wasn’t there.  And I knew you, very real and alive to me, and Dwight, Lurch, and Jerry were not.

Charles Kemp, father to David, husband and companion, neighbor, citizen.  Very real.  Thank you for making the Wall so real to me by being alive. 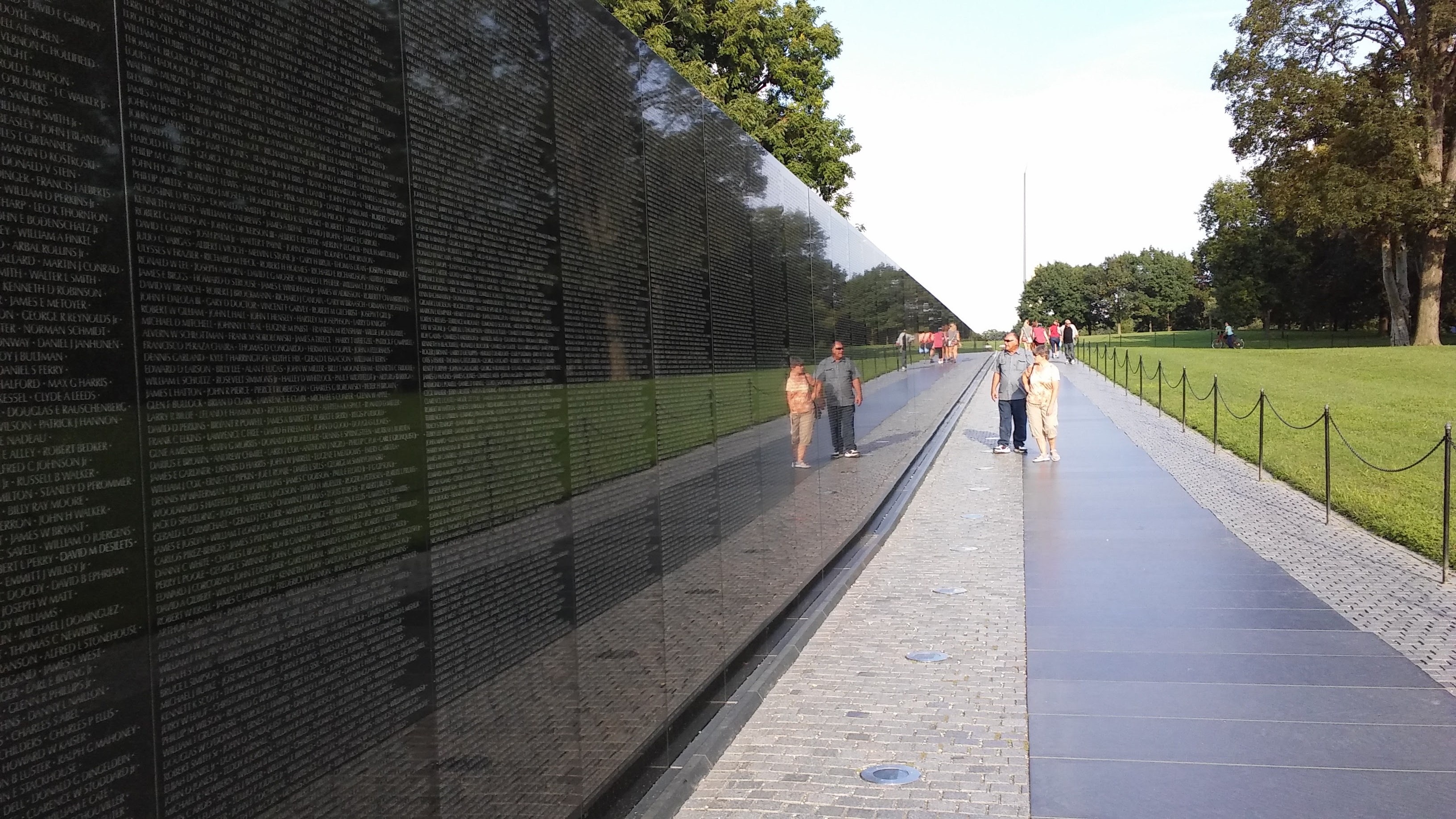